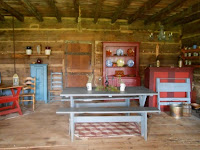 The  eight point walls of  Star Fort built in late 1780 and completed in early 1781 by Loyalist soldiers and slaves still stands in Ninety Six, South Carolina.  You can view the original walls of the Star Fort and the surrounding historical buildings at the Ninety Six National Historic Site.

In May of 1782, Major General Nathanael Greene of the Continental Army led 1,000 men in a siege against the 550 Loyalists who were also born in  at 96 and the connecting Star Fort. The 28-day siege was unsuccessful and the Continental Army was forced to lift the siege when support of British troops were rumored to be on the way.

According to the National Park, "the unusual name of Ninety Six (96) was given to this area by early traders in the 1700's because they mistakenly believed it was the estimated number of miles to the Cherokee village of Keowee in the upper South Carolina foothills."  I think this is a culturally biased assumption as I find it hard to believe that the Indians, French traders or British loyalists were using miles as their standard of measurement. I hope one of my readers will know more about the history of kilometers, miles and other standards of measurement in order to prove the above theory right or wrong. 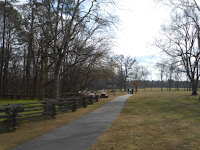 At the National Historic Site you can see porcelain serving bowls from China at the visitors center and walk the many paths around the fort and surrounding historic buildings.  Also, the visitors center has numerous accounts and stories of the Revolutionary War and its impact and repercussions on the people living on land in the midst of its first major war.